I’ve been following the world of WebAssembly (Wasm) for a while now without getting the chance to get my hands dirty. My excitement primarily stems from the fact that Wasm is a W3C officially supported language, making it a core language of the web alongside HTML, CSS, JS (and SVG), i.e. no plugins (Flash, Silverlight). I know predictions are futile, especially in the tech world, but I believe this will be the key differentiator in Wasm’s future popularity.

Wasm is a binary format that can be run in the browser. The goal behind Wasm is to create a web-based language that is more performant and portable than JavaScript. Unlike JavaScript, Wasm doesn’t have to be interpreted, it just executes, making it faster. Wasm is just code, like JavaScript, so it can run in the same JavaScript runtime giving it the same sandboxed security and access to the same APIs (via JavaScript calls). 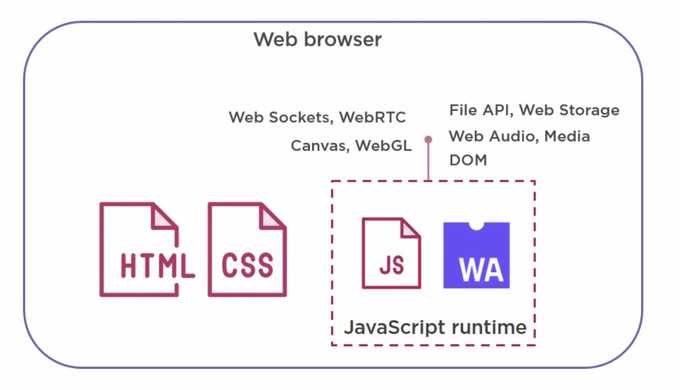 Wasm by itself doesn’t provide any Web-specific functionality, it has been designed to be platform agnostic, which gives it that portability. Under the hood, the Wasm runtime is a stack-based VM, like the JVM, which makes it a compelling compilation target as well as giving it the ability to execute in other environments. This design, coupled with the performance benefits of Wasm, has led to an exciting ecosystem of Wasm runtimes such as Wasmer and Wasmtime that run outside of the web. APIs such as WASI can also bring file access and networking to non-web environments which has led to the rise of Wasm containers.

Importantly for the web, the fact that Wasm is a target for compilation brings with it lots of possibilities. In fact, Wasm isn’t really intended to be written by hand, rather as a compilation target for other languages such as C, C++, Rust etc. This is another major reason behind my excitement as it opens out the web to different types of applications that it couldn’t run in the past.

It isn’t intended to be a JavaScript replacement, just to compliment it for specific use cases where performance is an issue. JavaScript can run Wasm modules, this way you can pass off computationally intensive operations onto Wasm to speed up your applications. The implications of this are huge, introducing new use cases to the web such as bringing other languages into the browser (Blazor), audio/video editing/streaming, gaming, video calling, VR/AR, AI/ML etc. that could not have been possible before due to the limitations of JavaScript.

Time to get my hands dirty...

As a decent introduction to Wasm I decided to try and port my 3D Software Renderer to the web. This was written in C++ so I decided to use Emscripten which is a compiler that can compile C++ into Wasm. It basically is a drop-in replacement for a standard compiler like gcc or clang. Simple, install Emscripten and compile it to Wasm right? Well, not quite...

The original renderer uses the GDI+ API, which is an interface for Windows Apps to draw device independent graphics. This isn’t an option on the web. Emscripten targets WebGL/OpenGL but also supports the Simple DirectMedia Layer (SDL) library. This is a cross-platform library providing low level access to the graphics hardware. The renderer makes use of low level graphics primitives such as vertices and pixels, plus SDL works natively with C++, so I decided to use this as the GDI+ replacement.

The original renderer uses the .MD2 model format. The code to load MD2 files remained the same, the only issue being how to access the file system to load it? Obviously on the web, accessing the local file system is a big no-no. Instead, Emscripten provides a virtual file system that simulates the local file system, meaning your C/C++ code that makes use of file APIs such as iostream and fstream can be compiled without requiring any major changes.

The only change required was to package the required files at compile time. This was simply a case of adding the --preload-file argument to the compiler and pointing it to a folder containing the models and textures. This generates a .data file containing all of the files in that directory which is then mapped to the virtual file system. The generated JavaScript code then takes care of loading the files.

Texturing required some minor changes. As texturing is basically just selecting a specific colour from a texture map and applying that to a pixel, I had to replace the GDI+ Color class with SDL_Color, but again being low-level, the classes accept the same RGBA arguments so this was extremely simple.

The renderer uses an infinite event loop to redraw and update the image. This brings it into direct conflict with the JavaScript event loop which waits for events, runs them, and returns control back to the browser. The problem is that the renderer will never relinquish control back to the JavaScript event loop, so the browser cannot accept any more events, and the whole page becomes unresponsive.

To fix, use the emscripten_set_main_loop() method. Under the hood this uses the requestAnimationFrame() API to update before the next repaint and ensures control is relinquished back to the browser.

Setting up your dev environment

It can be tricky to setup a nice dev environment and workflow when doing this kind of work. I found the following to be extremely helpful.

Add the SDL libraries to your Visual Studio solution. This will give you intelli-sense and API info that will help you during development:

Then for compiling with Emscripten, use the SDL2 port instead via -s USE_SDL=2. This will save you having to point Emscripten at the required SDL libraries.

For any Emscripten specific calls in your code surround with the #ifdef __EMSCRIPTEN__ preprocessor directive. This way your code will compile in both Visual Studio and Emscripten.

For the main loop I found it best to support both native C++ as well as Emscripten. This way you can develop and test inside Visual Studio to get a first pass and make sure everything is working OK, then you can compile with Emscripten afterward. This will look something like the following:

Here we’re setting the Emscripten main loop (to relinquish control back to the browser as previously mentioned) if compiled using Emscripten, otherwise for native runs we just run the loop indefinitely.

The fact that this was a painless process is a testament to the forethought that has gone into Wasm and the quality of tools in the Wasm ecosystem, Emscripten in particular.

Here is the WebAssembly software renderer in action. I haven’t ported all of the original renderer’s features yet such as shadows and fog, and I plan to add some controls for users to play around with it which will give me chance to look into calling C++ from JavaScript. Stay tuned for these!